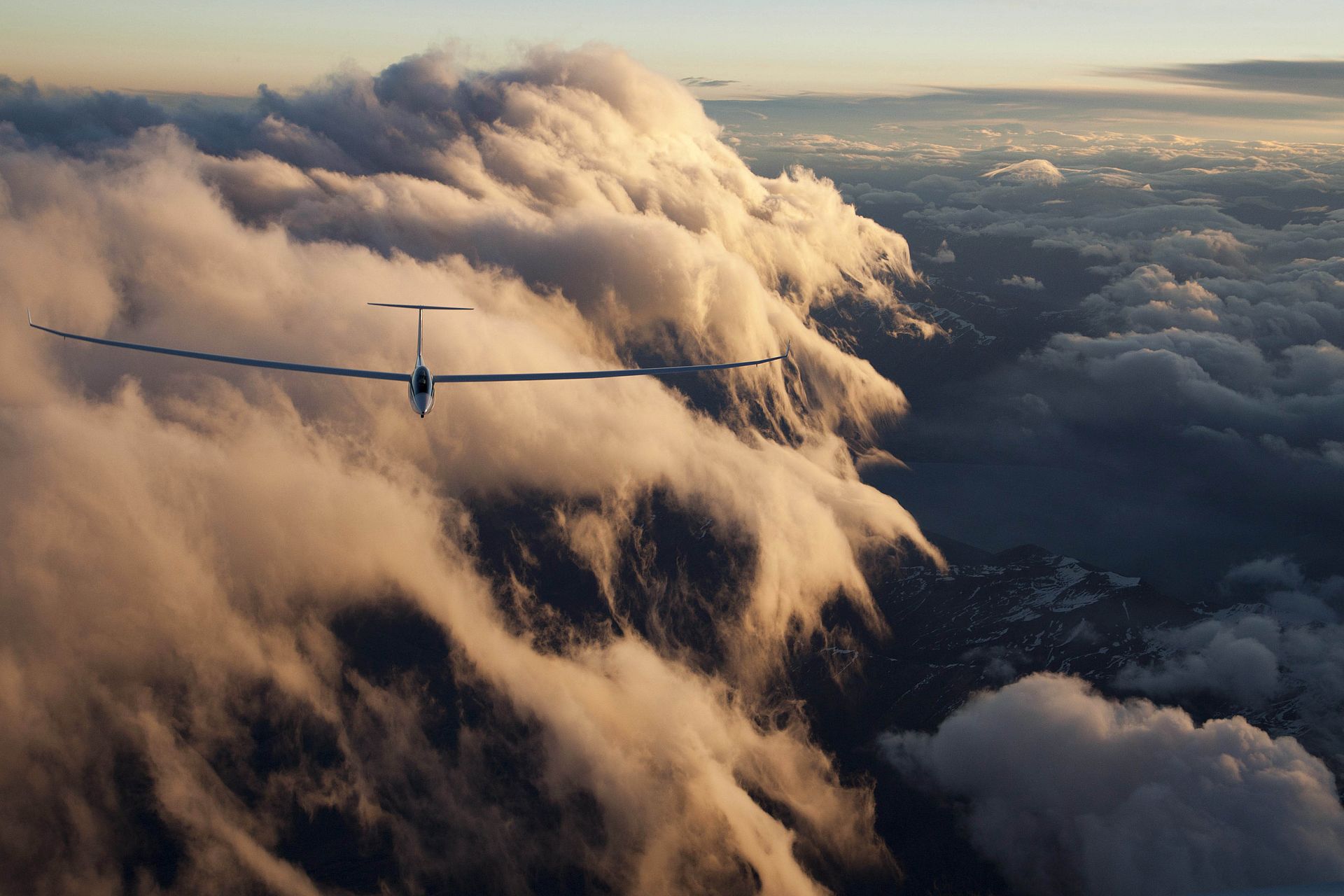 Gliding has always been using solar and wind energy as efficiently as possible. In 2018, our company's aircraft alone flew over 21 million kilometers worldwide in pure gliding (source: OLC), i.e. almost one and a half times around the equator every day, without emitting one gram of CO2.

However, the manufacturing process requires energy. In recent years, we have already invested heavily in energy- and emission-saving improvements and will continue to work permanently in the coming years to further reduce avoidable CO2 emissions in our production.

Unavoidable CO2 emissions also occur during production because, for example, materials such as carbon fibre and glass fibre cannot be replaced. These emissions could only be avoided by ending our aircraft production. Since this is not a sensible option, we have decided to make the remaining CO2 emissions climate-neutral.

We hereby follow the approach of the Allianz für Entwicklung und Klima, which was launched by the German Federal Ministry for Economic Cooperation and Development and whose supporters include Schempp-Hirth.

Climate change is the greatest challenge facing mankind since the end of the Ice Age. There is now worldwide agreement that we urgently need to limit this man-made climate change. The success of emission reductions depends to a large extent on the voluntary and consistent action of industry in the industrialised countries. We too are prepared to take responsibility for the world that we leave to our children and grandchildren.

Greenhouse gases are evenly distributed in the atmosphere. It therefore makes sense to avoid emissions where costs are lowest. In addition, projects in developing and emerging countries contribute to improving the economic, social and ecological situation and support the implementation of the United Nations' sustainability goals. For emerging and developing countries, emissions trading is a key driver for the transfer of clean technologies and sustainable economic development.

Why are we doing this? Because we have understood what the Intergovernmental Panel on Climate Change has conclusively stated: The avoidance of emissions costs only 0.6% of the annual added value, while the elimination of the damage costs many times over in the case of a "continue as is". We are aware of our special responsibility as a company towards future generations and have acted accordingly.

The climate impact associated with our company has caused Fokus Zukunft GmbH & Co. KG for us: Our CO2 footprint amounts to approx. 985 tons of CO2 equivalent pollutants per year. Accordingly, we have offset our annual CO2 emissions and those of our products for 2019 and 2020 by acquiring the climate protection certificates. By way of illustration: on average, a German causes about 10 tons of CO2 per year through his lifestyle.

We have selected the project in a group of Schempp-Hirth employees and a project to save tropical rainforest in Brasil from deforestation quickly turned out to be the favourite.

Here are some links to the climate protection project selected by Schempp-Hirth:

What is climate change and what are its consequences?

Climate change is the greatest challenge of our time. Not only is it an environmental issue, as too many people still believe, but it is an all-encompassing threat, as it will change production and living conditions dramatically. Climate change is caused by greenhouse gas emissions, such as carbon dioxide, methane, nitrous oxide and refrigerants, which have been emitted into the atmosphere in large quantities since the beginning of industrialisation. The main causes are the combustion of fossil fuels such as coal, gas and oil. As a result, the earth already warmed up by about 1.2 degrees Celsius. The Intergovernmental Panel on Climate Change estimates that the Earth's surface temperature will warm by an average of another 4 degrees Celsius by the end of the century unless we act more decisively. The international community has agreed that global warming must be limited to below 2 degrees Celsius in order to prevent catastrophic consequences. However, the commitments made by the individual states are only sufficient for 4 degrees. In order to close this gap in ambition, companies and citizens must make an additional and considerable commitment. The consequences of climate change are far-reaching and affect ecosystems, the economy and health through temperature extremes and changes in precipitation patterns.

Another effect of climate change is the rise in sea levels, as water expands as it warms and, due to the melting of glaciers and ice sheets, a larger amount of water flows into the oceans. Not all regions are equally affected by climate change. Coastal areas and poor regions are particularly at risk, as they have little chance of adapting to impacts such as increased drought or heavy rainfall and floods. The result is increased poverty and flight from such areas.

What can we do about climate change?

"Solutions to climate change are not only found in research centres and laboratories, but are also created by the innovative spirit of those people who are most affected by this change. Many communities and companies as well as local and national governments, including in developing countries, are already showing us the way to a CO2-neutral world. These efforts must now be expanded at the global level. Climate justice also requires that those more prosperous countries, which are largely responsible for the increase in greenhouse gases and have also reaped the benefits, help poorer nations adapt to climate change." [Kofi Annan, former UN Secretary-General]

Solutions for climate change are demanded and increasingly implemented by citizens, companies, regions and cities. To this end, an internationally binding agreement was created in 1997 with the Kyoto Protocol, which regulates greenhouse gas emissions from some emission-intensive industries in industrialized countries. It was updated in the Paris Protocol, which entered into force on 7 November 2016.

How are emission certificates generated?

he greenhouse effect is a global phenomenon because the distribution of greenhouse gases in the atmosphere is roughly the same. Therefore, it does not matter where in the world greenhouse gases are saved or stored. The Kyoto Protocol, which is binding under international law, therefore stipulates that so-called climate protection projects that avoid or store greenhouse gas emissions should take place where they are most economical. Accordingly, there are many projects in threshold and developing countries, because here the potential for savings through new technologies is still very high and these can be used much more cost-effectively. In addition, the conditions for renewable energy plants (sun, wind, water and biomass) are often much more advantageous there. The initiators of climate protection projects - predominantly renewable energy projects - receive emission credits for their commitment, which can be traded in the form of climate protection certificates. The amount is measured, for example, by comparison with the emissions that would have resulted from the construction of a coal-fired power plant, where emission reductions are achieved where the costs of avoiding one tonne of CO2 are lowest.

In addition, emissions trading contributes significantly to the transfer of clean technologies to emerging and developing countries, to sustainable economic, ecological and social development in the region and to the achievement of the United Nations' sustainability goals.

What are the benefits of climate neutrality for our company?

1. contributing to the objectives of the Government, the European Union and the United Nations Sustainability Goals (SDG).

2. raising awareness among employees, suppliers and customers about the use of finite resources. This positively changes the way energy and other resources are handled in the company and in people's everyday lives.

3. entry into the growth market "sustainable companies". The "climate-neutral" status enables us to distinguish ourselves in our market segment.

At present, this enables us to play a pioneering role and thus positions our company as progressive, innovative, cooperative and forward-looking.

5. promotes awareness of the energy revolution.

6. the company's status as a climate-neutral company and its range of products make it a partner to its customers in the above-mentioned areas.

What happens to the CO2 certificates after they have been sold?

The acquired number of CO2 certificates was decommissioned. This is important because this closure is a prerequisite for the design and marketing of CO2-neutral companies and/or products. Without decommissioning, a CO2 certificate could continue to be traded on the voluntary market if necessary, which would not achieve any additional reduction in emissions.

Which projects are supported by the purchased emission rights?

We and our staff particularly believe in the future of renewable energies and the opportunity for sustainable growth, especially in developing countries. That's why we invested in a forest conservation project in Brazil. To compensate for our greenhouse gases, we have received the "climate-neutral products and climate-neutral company" awards.