Grand Prix successes for our Ventus-3

At the finals of the Sailplane Grand Prix in St. Auban, France, last September, the Ventus-3 was able to take four daily victories in a total of six days of competition. Three of them on the first three days with "Super" Mario Kiessling at the helm.

The Sailplane Grand Prix is currently being contested with 18-metre planes; at the finals of the series in Saint Auban, France, in September, a total of twenty pilots competed, six of them with our Ventus-3. In Saint Auban, the wing loading is limited to 48 kilograms per square metre of surface area, and the take-off for the races is a so-called regatta start, where all planes cross the starting line at the same time. The first nine finishers on each day receive points - the first ten, the second eight, and then it's down to the ninth, who receives one more point. These points are added to the overall ranking, and whoever has the most points on his account at the end of the competition, which should consist of at least six scoring days, is the new world champion.

Mario Kiessling's performance in the first three days of the competition was outstanding. "Super-Mario", as the pilot of the Ventus-3 is soon called by the two commentators of the competition, dominates the first days also thanks to his aggressive and creative approach. Mario Kiessling always storms ahead of the pack, chooses his own lines, sometimes flies deep in the terrain, which then also leads to success in the first days because of his good local knowledge. His race to catch up on the third day was sensational: although he was almost left behind by the pack led by Sebastian Kawa, Mario Kiessling showed the necessary patience at Pic de Bure, was rewarded with a five-metre beard for his final approach and was able to overtake the field, which had already largely lost ground, from a much higher final approach altitude to St. Auban. However, it also becomes clear that the Ventus-3 - at least with the wing loading prescribed here - is no match for any other glider.

On the fourth day of the competition, "Super Mario's" winning streak came to an end: Kissling jumped too low from the Pic de Bure in an easterly direction, failed to make the jump over the Lac de Serre-Ponçon in the direction of Barcelonette and finally gave up the flight - trailing the field with no chance of success - and returned to St. Auban without completing the task. This zero brings the Pole Sebastian Kawa, who can't win the day either but still finishes second, within one point of the Ventus pilot. The fifth day of the classification was a neck-and-neck race between the two leaders, neither of them was able to pull away decisively. In the end, Sebastian Kawa beat his German rival by just over a minute and took over the overall lead for the first time with a one-point advantage.

The starting position for the last day of the classification is clear: Whoever of the two is in the lead will become world champion. Mario Kiessling risks a lot again, finds himself deep in the terrain again after about half of the flight and also breaks off this flight in a hopeless position behind the field. Which finally brings Sebastian Kawa the title. Tilo Holighaus was the best pilot on this last day: Hanging a bit behind the field, he was able to avoid a rain shower on the last kilometres, and he also pulled a decent final approach beard and won this last day.

For all pilots, this Grand Prix final in Saint Auban was a wonderful experience with exciting flights and a great atmosphere among the participants. And our Ventus-3 impressively proved its competitiveness in the 18-metre class. 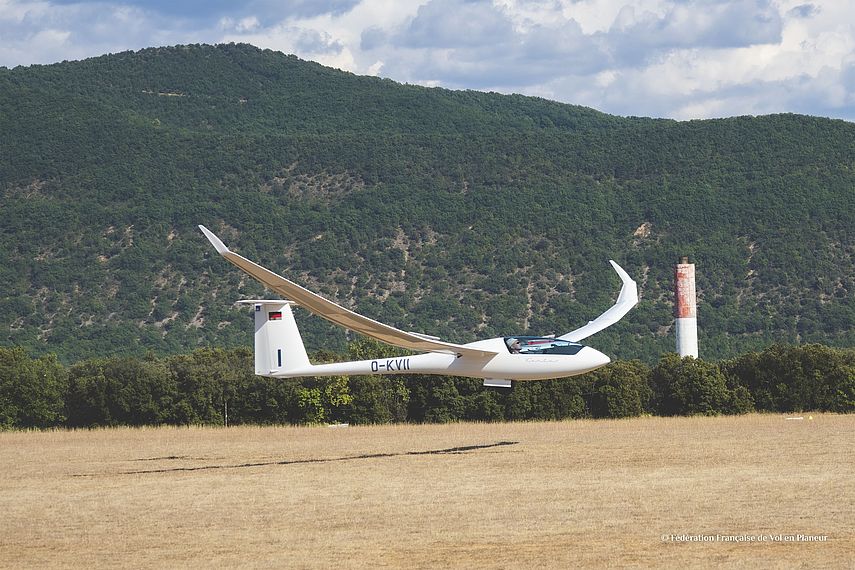